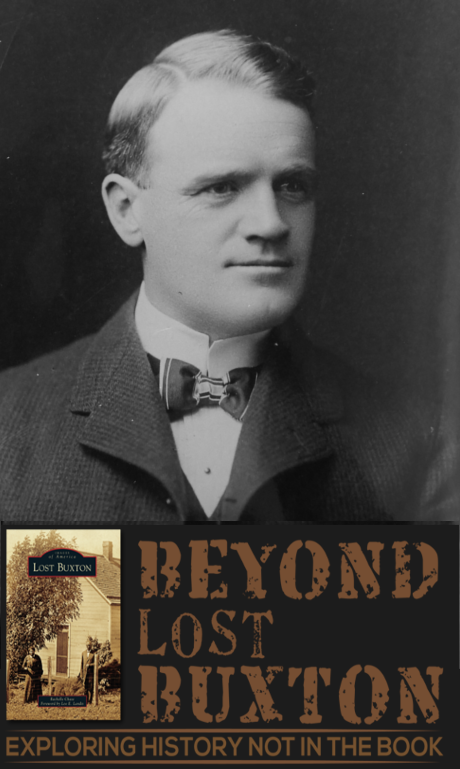 In Search of Ben Buxton – Part I

When I finished writing LOST BUXTON, I felt a sense of panic. Sort of a but-this-can’t-be-the-end feeling because I’d barely scratched the surface. There was so much history left untold. So much more to be researched. So many unanswered questions about Buxton, Iowa—the thriving coal mining town established in 1900 that was integrated, its 5,000 residents, of which 40%-55% were African American, living and working side by side.

My key questions included Ben Buxton. Who was this man who’d created this amazing town? And why, in 1900, had he created an environment of inclusion and equality for African Americans when so few others had?

Several weeks ago, I renewed my search for answers. I flipped through the dozen or so pages of skimpy information I’d accumulated on Ben Buxton, stopping at an article from the April 24, 1933 issue of the Oskaloosa Daily Herald titled “BEN C. BUXTON DEAD”. The article went on to say, “The body will be taken directly to the Buxton home at Middleton [sic], Springs, Vt., where funeral and burial will take place Friday.”

Middletown Springs, Vermont. It was a good place to start.

As the phone rang, my heart skittered with excitement. Though Sally may have been too young to have any memories of Ben, had her father told her about him? Would she have answers to my questions?

When Sally answered, I stumbled through my introduction, sounding less like an author and more like a starstruck Buxton Family groupie, before finally asking, “So, uh, do you remember your father talking about Ben Buxton or Buxton, Iowa?”

“No. Just that someone was out there and he was in coal mining and into something else I can’t remember.” Before disappointment could settle in my stomach, Sally added that her cousin, Barbara Buxton Boisse, was the family historian and might know.

I squashed my inner groupie and called Barbara, pleased that I sounded professional when she answered. Okay, slightly more professional.

Since 1969, Barbara has been the historian/genealogist for the Buxton Family Association of America, which was established in 1903 at a family picnic in Douglas, Massachusetts. According to Mary Buxton Church, the hostess of the picnic, everyone in attendance was a descendant of Otis Buxton, the son of Captain James Buxton who’d been a soldier of the American Revolution and was a direct descendant of Anthony Buxton. The Association has been able to trace all Buxtons in the U.S. back to Anthony. “Anthony Buxton sailed on the Speedwell ship from Devonshire in England to Salem, Massachusetts,” said Barbara, who at 87 years old, sounded more energetic and peppy than someone half her age. “He arrived around the 1630s with his brother Thomas.”

I took a moment to marvel at the fact that she and her family could trace their roots back to the early 1600s and their ancestors to a town bearing their name in England, as well as discover that their family motto, “Do It With Thy Might”— adapted from Ecclesiastes 9:10: “Whatsoever thy hand findeth to do, do it with thy might; for there is no work, nor device, nor knowledge, nor wisdom, in the grave, whither thou goest.”—had been granted to Sir Thomas Fowell Buxton.

Then I steered the conversation back to Ben.

“He was known primarily as B.C. to the people in Vermont,” said Barbara. “I remember my father and uncles a talking about B.C.” But Barbara remembered her father, Myron Buxton, talking about John Emory Buxton—or J.E., as he was called—more. J.E., like his father, had been a prominent man in Middletown Springs. “J.E. was a very humble man. He was tremendously family-oriented. My father said he was well-liked and really gave to people. Gave money, gave whatever he had.”

From the interviews of former Buxton residents, many had credited Ben with “doing right by” and “taking good care” of the people in Buxton. Could J.E.’s spirit of giving have influenced B.C. to do that?

Perhaps to better understand B.C. I needed to start with J.E.

John Emory Buxton was born in October 20, 1839 to Luther and Samantha Paris Buxton. After completing school, he taught during the winter and helped out with the family farm in the summer. When his father died in 1851, J.E. inherited the family homestead in Middletown Springs. He married Antha Clift on November 20, 1865 and shortly thereafter they had two children: Mae Louise, born August 20, 1866, and Benjamin Clift, born September 18, 1867.

The same year of Ben’s birth, J.E sold the farm to his brother Edwin and headed to Iowa, temporarily leaving his family behind. Most likely this solo trip was to get settled, for in 1868 his family joined him in Moingona, Iowa where he had been working in the hardware business. A year later he joined the Chicago & North Western Railroad as a purchasing agent for the Iowa division, where he was responsible for buying railroad ties, coal, and wood.

When the Chicago & North Western Railroad bought the Consolidation Coal Company from the McNeil Brothers in 1881, J.E. became the superintendent of company’s Muchakinock operations. The mining town of Muchakinock was the predecessor to Buxton.

For sixteen years, J.E. remained superintendent of Muchakinock before resigning in 1897 and passing the baton to B.C., resolving to, “not die with the harness on,” according to Rutland County’s Book of Biographies. He returned to the farm, “which he had repurchased [from his brother] some years previously”. An avid real estate investor, he also purchased nearby farms and expanded the original 300+ acres to more than 1,500, establishing apple and maple tree orchards, in addition to a substantial dairy operation. He also owned property in Rutland County, Vermont and farmland in Nebraska.

Additionally, he was active in the Republican Party, serving as the representative from Middletown Springs to the Vermont General Assembly from 1900 to 1901 and a state senator from 1904 to 1905. He died in 1923, ten years before B.C.

“I wish I had known them, to be truthful,” said Barbara.

“Me, too.” I meant it wholeheartedly.

Okay. I’d learned a lot about Ben’s father. But what about Ben? Was he like John? Would I learn why Ben had created Buxton the way he had?

'Beyond Lost Buxton' Will Go Live on May 1st

The Inspiration Behind LOST BUXTON

Rachelle Chase · 3 weeks ago
@Rachelle_Chase
Julie Gammack introduced me Dr. Anita Fleming-Rife at the awesome @OkobojiWriters last year. Last week, I talked to her about the great programs she's bringing to Iowa to help Black youth. https://t.co/wFfQXiBtf2
View on Twitter
0
2