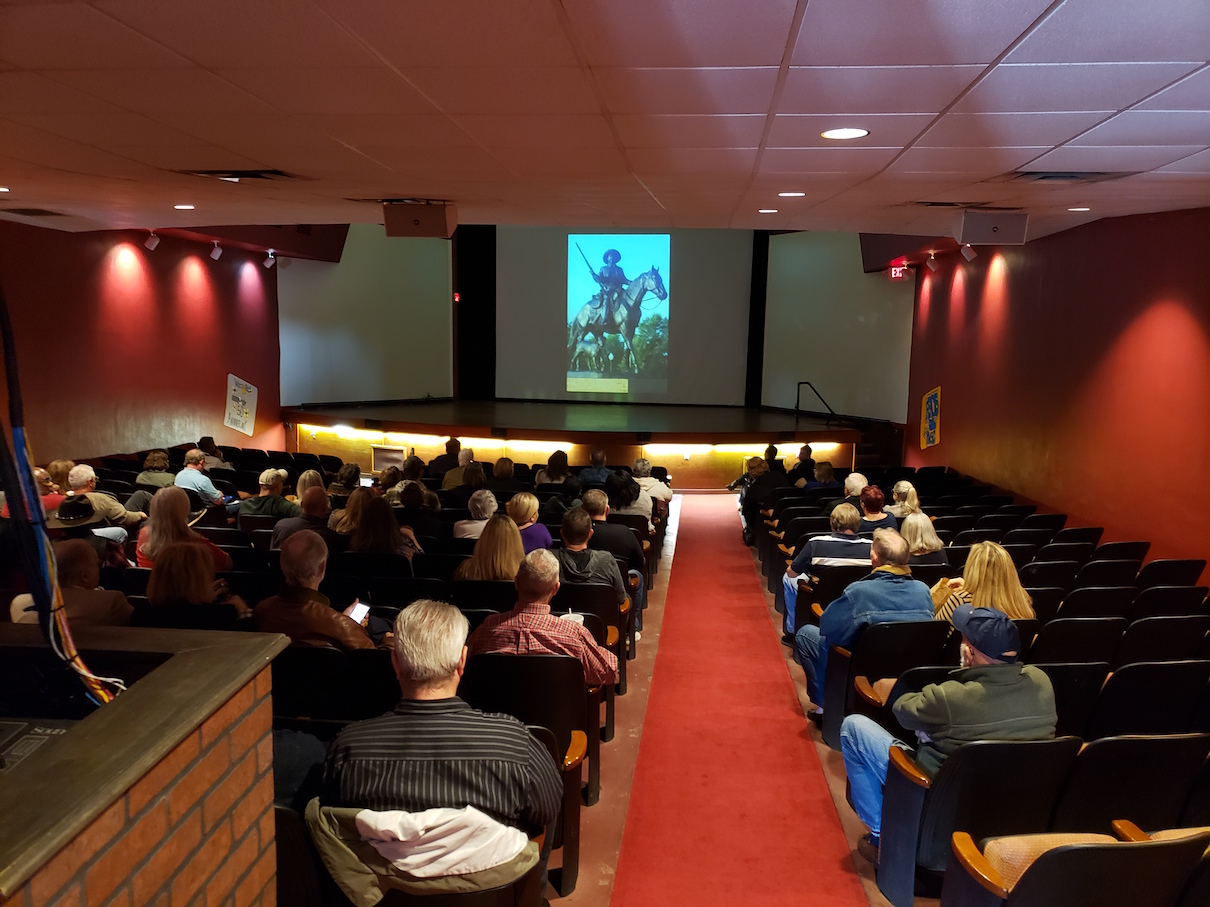 Hell on the Border Movie Premiere and Bass Reeves

Hell on the Border, the new movie based on the life of the amazing African American Deputy U.S. Marshal, Bass Reeves, hit theaters Friday. But on November 15th and 17th, 2019, it had its world premiere in Muskogee, Oklahoma. While traveling through Muskogee, I discovered this by accident via a sign posted on the Three Rivers Museum door.

Which made me wonder, “Why would a movie premiere in a town of less than 40,000 people?”

“This was Bass Reeves’s territory,” said Susan Yates, a history buff who was born in Muskogee. “Marshals were the law for the general population when Oklahoma was Indian Territory. The Territory was a wonderful haven for criminals because local law enforcement couldn’t touch them.” This was because Native American police couldn’t arrest anyone who wasn’t a citizen of their nation. “The only people who could were sent with warrants, which is where the marshals came in. When Oklahoma became a state, Bass was in his 60s, had a nice home in Muskogee, so he retired and became a policeman.”

The museum, which contains information about Reeves, is on the corner of Bass Reeves Walk.

“That was his beat,” said Susan.

Assigned to the most dangerous areas in the Indian and Oklahoma territories, Reeves’s intelligence and shooting skills enabled him to capture more than 3,000 outlaws, reputedly killing only 14. While more than 114 deputy marshals had been killed in the line of duty in the same area, during his 32 year career, Reeves reportedly was never even wounded. Reeves’s accomplishments liken him to a real-life superhero.

Bass Reeves and the Lone Ranger

Burton admits it is hard to prove this beyond a doubt but adds, “We can, however, say unequivocally that Bass Reeves is the closest real person to resemble the fictional Lone Ranger on the American western frontier of the nineteenth century.”

Hell on the Border – the Movie

A short walk down the red carpet at the Roxy Theater led to a photo with U.S. Marshall Rooster Cogburn.

Afterwards, I entered the theater where couples, friends, and strangers – like me – chatted, then took our seats.

Hell on the Border uses one event – the capture of the unpredictable, egotistical, deadly outlaw Frank Dozier (Frank Grillo) to show how Reeves became a deputy U.S. marshal. Reeves (David Gyasi) wants to be a marshal but Judge Isaac Parker (Manu Intiraymi) doesn’t think the world is ready for a black one. But when Parker asks the white marshals to go after Dozier, no one volunteers. So Reeves seizes the opportunity, telling Parker that he will do it and when he succeeds, Parker must make him a marshal. The rest of the movie highlights Reeves adventures as he chases Dozier — and that silver star.

Sure, there was action and gunfire, with Reeves showcasing his skill with a gun early on by shooting a handful of men with greater ease than swatting a fly. Sure, there are bad guys, with Grillo portraying the baddest guy of them all.

But what resonated with me was David Gyasi and how, in every scene, he portrayed Reeves as a skilled, smart, strong, proud, honorable family man who stood by his word and principles at all costs. A man who held his head high and commanded respect, in the midst of racism.

“The quietness he showed is how I pictured Bass Reeves,” said Susan.

I had some problems with the plot/script, music, and pacing. But I enjoyed Grillo’s and Gyasi’s individual performances and I applaud Wes Miller for bringing Bass Reeves and black cowboys to the forefront of American History and onto the big screen. I am grateful to him for attempting to give them the credit they are due.

I don’t know how historically accurate Hell on the Border is but I am inspired to learn more. Which is why I’m reading Burton’s “Black Gun, Silver Star.”

Actor James Whitecloud, who played a sheriff in the movie, stayed for Q&A afterwards. Not only was it a pleasure to meet him, I was happy to learn that his great-uncle, Will Sampson, had played Chief Bromden on “One Flew Over the Cuckoo’s Nest” (1975). That had been one of my favorite movies (and books) when I was a kid. Thrilled to be able to video interview Whitecloud, I queued up my cell phone camera, only to have the battery die.

At least there was enough battery life for a photo.

I found heaven in Missouri