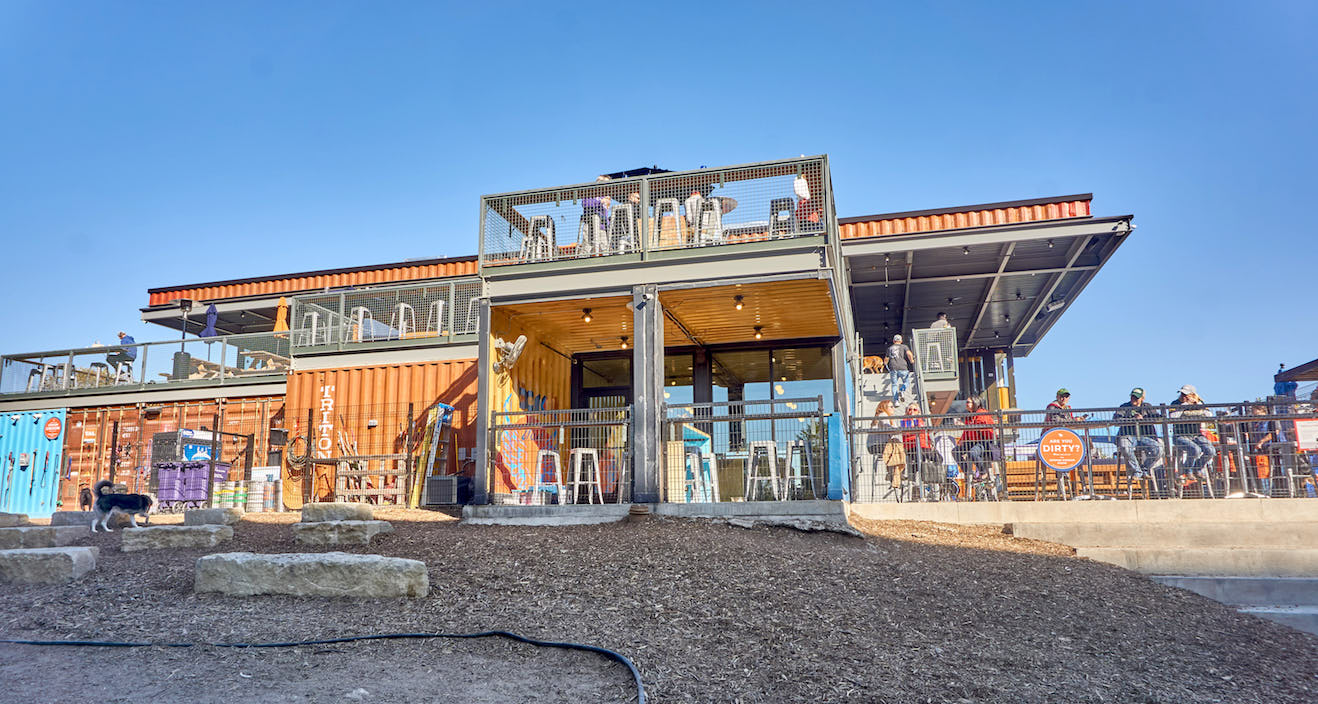 I found heaven in Missouri

I’ve been accused of spoiling my dog – accusations which, of course, are unjust. Sure, Bally goes to doggy daycare frequently. But that’s because I don’t have other dogs and Bally needs bonding time with his doggy friends. Yes, I make his “wet” dog food from fresh chicken or beef and vegetables. But that’s because it’s cheaper – and healthier – than canned food. And those homemade liver biscuits and bacon and cheese cookies? Well, Bally is a good boy and deserves special treats.

So imagine my excitement when I was supposed to be writing but, instead Googled “fun places to take your dog” and discovered Bar K Bar (get it? Bar K … BarK?) – heaven, in the form of a restaurant for people AND dogs, combined with a dog park, doggy daycare (while you eat/drink), and wi-fi and laptop-friendly loitering!

The Journey to Heaven

I packed up the RV and Bally and we took off to Kansas City, Missouri, a mere four hours away. Upon arrival, I parked in its football stadium-sized parking lot (slight exaggeration).

At the entrance, after certifying that Bally was neutered, up-to-date on vaccinations, and properly socialized, then waiving liability if either of us were scratched, bitten, or killed (another exaggeration), I paid the non-member entry free of $10 and Bally and I entered.

It was sensory overload. Seemingly dozens of dogs ran and jumped and tackled in groups. Others trotted around, sniffing every thing and every person in sight. Dog companions stood clumped in groups, talking, or standing solo watching their dogs.

Bar K dog tenders played fetch with dogs and cleaned up errant dog poop left by those they were tending.

Shaking off his shock, Bally ran up to packs of dogs, exchanged butt and genitalia sniffs, before joining in, as I stood and watched with pride. He ran up to strangers and jumped up on them, as I ran after him, filled with embarrassment and yelling “Off!” and apologizing.

Bonding Over a Meal

After all that fun, it was time for a late lunch. With Bally once again leashed, as rules mandated, we made our way to the patio, since furry friends are not allowed inside. After checking out the menu, I “forgot” my resolve to stick to no-poultry fare, forgoing the Tuna Poke Bowl and choosing the Turkey Sloppy Joe instead. I looked at the dog menu. Should I buy Sir Sometimes Picky Eater the never-tried Turkey and Sweet Potato Meatballs ($5) or Chicken Risotto ($6)? Or should we go with a known favorite, Beef Stew ($5)? Not wanting to waste money, I went with the stew. Though the large scoop of stew was more of a snack than a meal for Bally, we both enjoyed our choices.

Stomachs full, we both looked forward to doing our favorite things: Bally, playing and jumping all over everyone without me nagging; Me, working undistracted, on my laptop. So Bally was released to the care of the dog tenders, while I went inside to drink coffee and write.

Hours later, I’d written a few pages and Bally was tired. If I wasn’t happily living in Iowa, I would move to Missouri, buy a Bar K membership and hang out there every day.

Who knew heaven was in Missouri?

Hell on the Border Movie Premiere and Bass Reeves