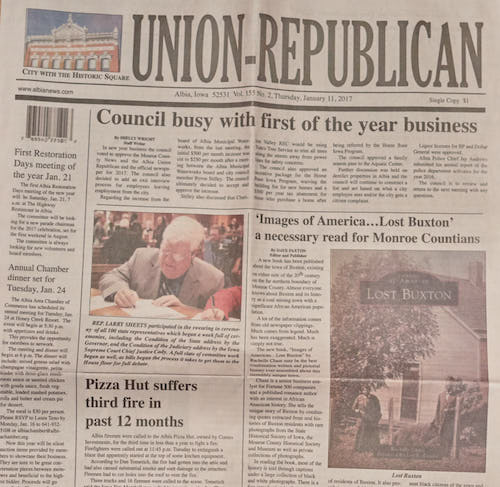 LOST BUXTON Made the Front Page of the Albia Union-Republican

“The new book … ‘Lost Buxton’ by Rachelle Chase may be the best combination written and pictorial history ever assembled about this incredibly unique town,” wrote Dave Paxton, Editor and Publisher of the Albia Union-Republican, in his article, “‘Images of America…Lost Buxton’ a necessary read for Monroe Countians.” The article appeared on the front page of the Thursday, January 11, 2017 edition of the paper.

To say I was thrilled is an understatement. Especially since Buxton, Iowa, appeared in the Albia Republican frequently throughout its 1900-1920s existence. And with the majority of Buxton falling in Monroe County—nearly 85% or 8,600 acres of the 10,200 acres purchased by Consolidation Coal Company to establish the town—and Buxton being 12 miles north of Albia, folks in Albia know about Buxton. So Mr. Paxton’s statement is a real honor.

As a writer, it is especially gratifying when readers connect to my work in the way that I intended. Mr. Paxton’s statement that the captions are what makes LOST BUXTON unique helps make the hundreds (thousands?) of hours I spent at the State Historical Society of Iowa reading transcripts and listening to recorded interviews of former Buxton residents to find the right quotes to use for captions even more worthwhile. For instead of writing captions with facts about the photos, I wanted the story of Buxton to be told by those who lived there and Arcadia Publishing let me do so.

“What makes this book unique is the oral history presented in the captions under the photographs by both African American and white residents.” ~Dave Paxton

Mr. Paxton goes on to say that LOST BUXTON provides a “powerful look at the coal mining industry” and a “balanced look at both black and white culture.” That, too, was my intent. Prior to moving to Iowa, I knew nothing about coal mining. But while researching Buxton, I became fascinated with it—its impact on Iowa’s economy, how coal was mined, and life in a mining town—and wanted LOST BUXTON to touch upon it. Just like the town was inclusive, I wanted LOST BUXTON to be. In addition to covering the equality, opportunities, and accomplishments of African Americans in Buxton that was so rare for this time period, I wanted to include the white perspective of Buxton as well. It is great to learn that both were appreciated by Mr. Paxton.

“The photography is top notch and provides a balanced look at both black and white culture of Buxton. It also gives us a lot of new information regarding prominent black citizens of the town and what they did to enhance the culture of the community.” ~Dave Paxton

So a huge thanks to Dave Paxton (and to Dave Johnson of the Monroe County Historical Society and Museum for informing me of the article) for appreciating LOST BUXTON and my efforts to get the word out about a town that should be known by all and not forgotten.

Buxton Talks Off to a Great Start With History Camp Iowa

Lost Buxton11 hours ago
As we talk about and strive for unity, we can't forget about Buxton, Iowa - and the lessons we can learn from it. https://www.desmoinesregister.com/story/opinion/columnists/iowa-view/2021/01/31/buxton-iowa-over-century-ago-gave-example-unity/4258423001/

Unity of the kind Biden aspires toward wasn't a fantasy in early 20th century Buxton, Iowa
Joe Biden said that “history, faith, and reason show the way to unity.” Buxton is an example of that history. Buxton is what can happen when we try.
desmoinesregister.com
40 7    View on Facebook

Rachelle Chase @Rachelle_Chase
11 hours ago
As we talk about and strive for unity, we can't forget about Buxton, Iowa and the lessons we can learn from it. #LearnFromBuxtonIowa https://t.co/GU8ub5gNRL
View on Twitter
0
8